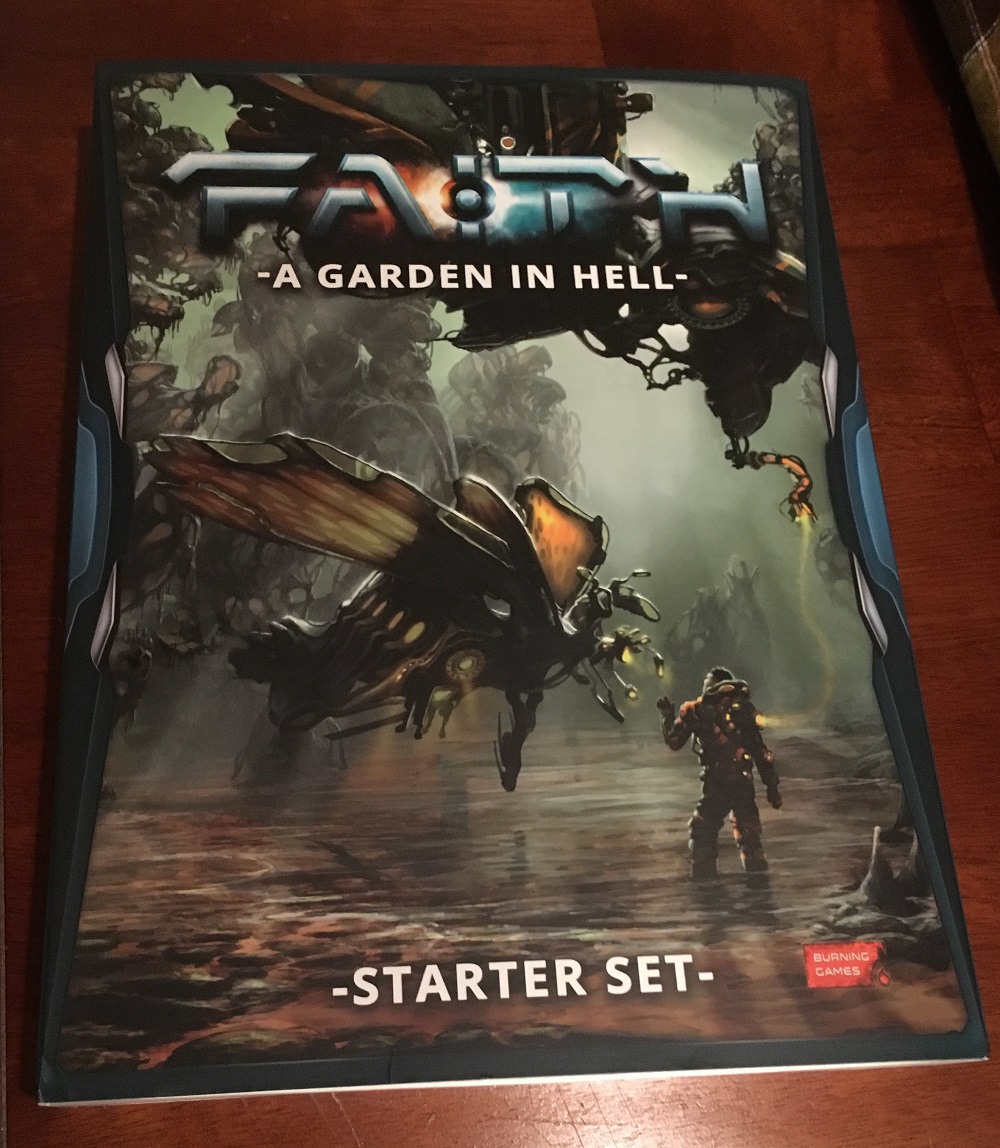 FAITH doesn’t use a dice mechanic, instead relying on a deck of playing cards. You can use a standard deck of cards, but the playing deck offered in this kit is really gorgeous and should be used if possible. The four suits are now four types of environments: Urban, Wilderness, Space, and OS. In the playing deck that comes with the boxed set, the art on each card shows some of the environment it’s supposed to represent. Whenever you enter a phase of the game that requires an element of chance everyone draws seven cards. You can choose to spend a number of cards equal to points in the attribute you’re using in a turn. However, you don’t get to redraw cards unless the suit of the card matches the environment you’re in, representing the task being easier, or you play a card that’s less than your rating for the skill, showing that it didn’t require much effort to do. The lack of redraw shows the fatigue that sets in as you attempt to accomplish difficult tasks.

I really like the card mechanic in FAITH and how it forces you to manage your resources, and controls how much effort you’re able to put in an action. It also helps prevent you from getting a bad ‘roll’ on something your character should be able to excel, as long as you’re willing to sacrifice a higher card to succeed. The redraw system is also very elegant, and I think it does a great job of demonstrating how a character might get exhausted as a combat or other action goes on.

Unsurprisingly, faith and gods are an important component of FAITH. Faith is even one of the six core attributes, alongside Dexterity, Agility, Constitution, Link (technical abilities), and Mind. You choose a god your character follows, and your actions in game determine whether or not you have your god’s favor. Unfortunately, when you lose favor you can lose access to some of the divine upgrades your god provides. The gods are varied enough that no one should feel like their characters are limited in how they act, and the description of each god gives some guidance on the most important tenets you should use to make choices. For instance a follower of Hexia cares about the greater good, and seeks knowledge and expertise. These foundational values can make it a lot easier to develop your character into a more nuanced one.

I found the choice of the six core attributes to be interesting. There’s no social attribute, and in most games dexterity and agility are combined into a single attribute. My understanding from the core book is that social situations should mostly be RP, but I like there being an element of chance that you’re really going to misread a situation or say the wrong thing when trying to persuade an NPC.

The starter kit also includes a small campaign to bring your players in on. This includes four starting characters, two male and two female, and one of each playable race. The character sheets have a lot of background for each character, and a pretty easy to understand layout for all of their abilities. They fold up like a folio, so you have a whole four pages worth of information and art to help you build up the story for your character.

A Garden in Hell has the players crashing on a planet and trying to remember and then complete their mission. The campaign book is nicely bound and 73 pages. Interestingly it is longer then the rules book, which weighs in at 37 pages. This will change with the release of the official core rule book, with a Kickstarter launching March 21, 2017. As with everything else I’ve seen from Burning Games, the art work in the books is stunning. The adventure has a long section in the beginning with an explanation of how to play the game, and instructions for the game are scattered throughout to help players learn the game in a shorter and more manageable form then just reading the rule book. Each section of the campaign also focuses on using different sets of skills like combat or intrigue so everyone can have a chance to shine. I also really like that they include a flow chart for the GM to follow that allows them to mark off what the party has accomplished and who they have encountered.

Gear and NPC’s in the starter kit are managed with a deck. The decks are pretty easy to understand, and the art for each item is once again beautiful. Currently you can also get the cards from the Burning Games website if you want to print your own, but gear and NPCs will also be listed in the soon to be released core book. I especially like having gear as cards, it makes it easy to track what you can do with what you have, instead of taking up space on your character sheet. Plus you get the art for each item.

This kit gives you everything you need to start your game of FAITH. I definitely think it’s worth the investment if you want to try out FAITH, especially since the decks are going to be endlessly reusable in future games. FAITH: A Garden in Hell is available now and you can get your own copy from Burning Games for €29.95. You can also upgrade to the deluxe box, which contains more box cards, a map, a comic book, mission briefings, and a miniature for €50. The PDF version of the basic starter box is available on DriveThruRPG for $9.99. If you want to look over the rules, check out the Burning Games website for a free download. Also keep your eyes open for the Core Book Kickstarter on March 21st!

I was provided with a free copy of FAITH: A Garden in Hell for review.

1 thought on “Review: FAITH: A Garden in Hell”