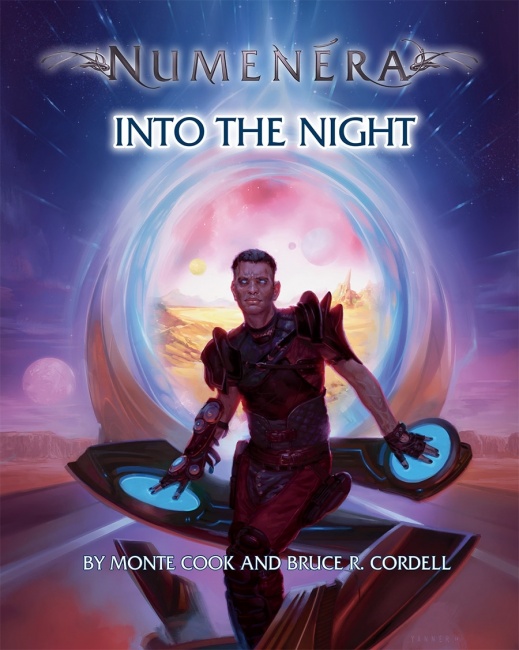 Into the Night is a new setting book from Monte Cook Games for Numenera. It focuses on expanding the world to outer space, and what terrors and wonders lie out there for the Ninth Worlders to discover.

It is a 160 page book, with the first section (about 35 pages) focusing on how to reach beyond earth and the bodies near enough to Earth for initial discovery and other exploration. The second section (about 45 pages) looks at the other planets in our Solar System. The third section (about 60 pages) looks at threats and places that adventurers can explore outside of our solar system. The book closes with 20 pages of new creatures to encounter. Throughout the book are new story seeds, cyphers, and artifacts.

Many of the existing astronomical objects are ones we can find the analogues for today: the Moon is, well, the Moon, Naharrai is Mars, Urvanas is Venus. However, there are new objects as well, like Branu’s Kiss a globe of blue-green water that orbits between Earth and the Sun. Or Calram, a small object that orbits earth, but is full of beings that have greater tech then the Ninth Worlders enjoy. There’s also a pretty great derelict ship for you to explore.

Beyond our solar system lies more planets, galaxies, and strangeness to explore. These new worlds include some of their history, distinguishing characteristics, and all kinds of ideas to build your own story from. There are also ten more planets that have rudimentary descriptions, which I think are great to use, but also give you an idea on building your own new weird planets.

Each section on a location in this book includes a handy “Using –” panel, with around five plot hooks to pull characters into a situation in that location. I think there’s a lot within the text as well to establish your own ideas for why the adventurers should be here. There’s also information on ways to get there, which can be handy when all the places are light-years apart!

I think there is a nice mix of new creatures, and the book also discusses how to re-skin other Numenera beasties to make them fit beyond Earth.

This book handily includes rules for combat between vessels – some of which was outlined in Worlds Numberless and Strange, but I think it is a valuable addition to Into the Night, especially when there’s always a risk your craft may be attacked by pirates. For ship to ship combat you first compare the levels of the ships, and if your ship is a higher level you have a reduction in the difficulty of actions involving the other ship. If it is lower, then the difficulty is increased. You still make attack and defense rolls, and things like ship weapons and coordination with other ships play into the difficulty as well. Specific maneuvers can also be accomplished by modifying the difficulty. There’s a lot going on to effect the roll, but I think the addition of ship to ship combat can make the game much more interesting.

One thing I found odd is a one place you can visit is called The Gloaming, which is also the name of the Vampire/Werewolf recursion in The Strange. Since the locations have nothing to do with one another, I think a different name would be more appropriate, even if in canon The Strange and Numenera aren’t connected.

One minor complaint I have with the book is the scattered nature of the new Numenera. It makes it a little more difficult to pull out a new artifact without them being gather in one place, and it also can make it difficult to find them again mid-play.

The art in the book is gorgeous, and there is some variation in styles throughout, but I think this serves to give a view of the Ninth World and beyond from other eyes.

I think this book brings a lot into any Numenera game, and is full of great ideas of how to bring Space into your sessions. Into the Night is available from Monte Cook Games as a PDF ($14.99) and Hardback ($39.99). It’s also available from DriveThruRPG as a PDF. You should also look into the beautiful Nightcraft glimmer, which goes into even more detail about a vessel that can by used to traverse space (MCG Store | DriveThruRPG | $2.99).