Aser and Megan were excited to have the chance to talk to Todd Crapper about his kickstarter for Vision Layers, and what it means for the future of RPG PDF accessibility. Vision Layers adds layers to PDFs to allow for the user to change the font, adjust colors, and make the document more screen reader friendly, while still only releasing one file.  Todd has teamed up with a huge variety of publishers for an initial release; with Timewatch from Pelgrane, CAPERS from Nerd Burger Games, Fate Condensed from Evil Hat, and Ninja Crusade from Third Eye Games already unlocked.

Please give this kickstarter a look and your support to show publishers that there is an interest in accessibility! We have really high hopes of seeing this method used in all RPG books in the future.

Vision Layers is running until December 12!

When we started The Redacted Files and the idea that I would become a regular player in a variety of games including Call of Cthulhu, D20 Modern and Numenera first started to materialize, a big question in my mind was how I would be able to roll dice. From listening to other actual play podcasts wrestle with large dice pool games, I’d heard about dice roller apps, and figured that would be the natural, and exclusive, tool I would be using if I wanted that function to stay in my hands. But that was way back in the Naïve days of 2014, when people were still figuring out a lot of what makes gaming as vibrant and dynamic as it is today: including the wonders of 3D printing.

END_OF_DOCUMENT_TOKEN_TO_BE_REPLACED

When working to make the tabletop experience more accessible for someone with a visual impairment, some obstacles might be more prominent than others. For instance, many people gravitate towards that repository of essential information, the character sheet: but a bigger problem arises when you dig a little deeper and realize many of the items on such a sheet are inherently mutable. Since so many of them are subject to change, even an accessible version, such as one printed out in Braille or large print may not fully duplicate the experience. This is a problem Megan and I have given some thought to over the years and what follows are some of the suggestions we’ve worked out.

First, a discussion of making character sheets accessible will probably help ground this conversation. For most of the time I’ve been gaming, Megan and I have prepared plain text character sheets for any visually impaired players who might be joining our groups. This offers the most versatile accommodation as it can then be accessed by desktop or mobile screen reader or magnifier, or output to a Braille display. If the facilities are available, it’s also usually the easiest starting point for creating a Braille document suitable for printing using a Braille embosser or using enlarged font. So, in essence, we can make the sheet bigger, talk, or tactile. The problem once again is that once play begins, the values on the sheet aren’t likely to remain static for long.

END_OF_DOCUMENT_TOKEN_TO_BE_REPLACED

Assistive technology is an amazing thing. I used to tell friends that for a large part of human history, careers for the blind were restricted to beggar, musician or soothsayer. That’s a fair bit of hyperbole, but by and large a wide swath of everyday occupations and leisurely pursuits were entirely closed off to people with even a minor visual impairment. But then came one leap forward after another in the world of computing and soon software existed that could read printed text aloud, turn computer output into spoken feedback and provide access to information in a coherent and digestible form. I graduated from law school in the top 5% of my class, record and produce a podcast enjoyed by literally dozens of people and make a nuisance of myself on social media just like anyone else. We truly live in a golden age. On Global Accessibility Awareness Day, I thought it would be useful to describe some of the tools I use to (effectively) run tabletop role-playing games online and in person as part of TRF. END_OF_DOCUMENT_TOKEN_TO_BE_REPLACED

As you may know, we are big fans of accessible gaming at TRF, so when we heard there’s an awesome new Kickstarter by 64 Oz Games we jumped at the opportunity to talk to them.

The Kickstarter launches on November 10, 2015 and will go for 15 days. You can check out a preview of the Kickstarter here. You can also visit them online.

Please check it out and support them get a new 3D printer to help make gaming available or everyone! 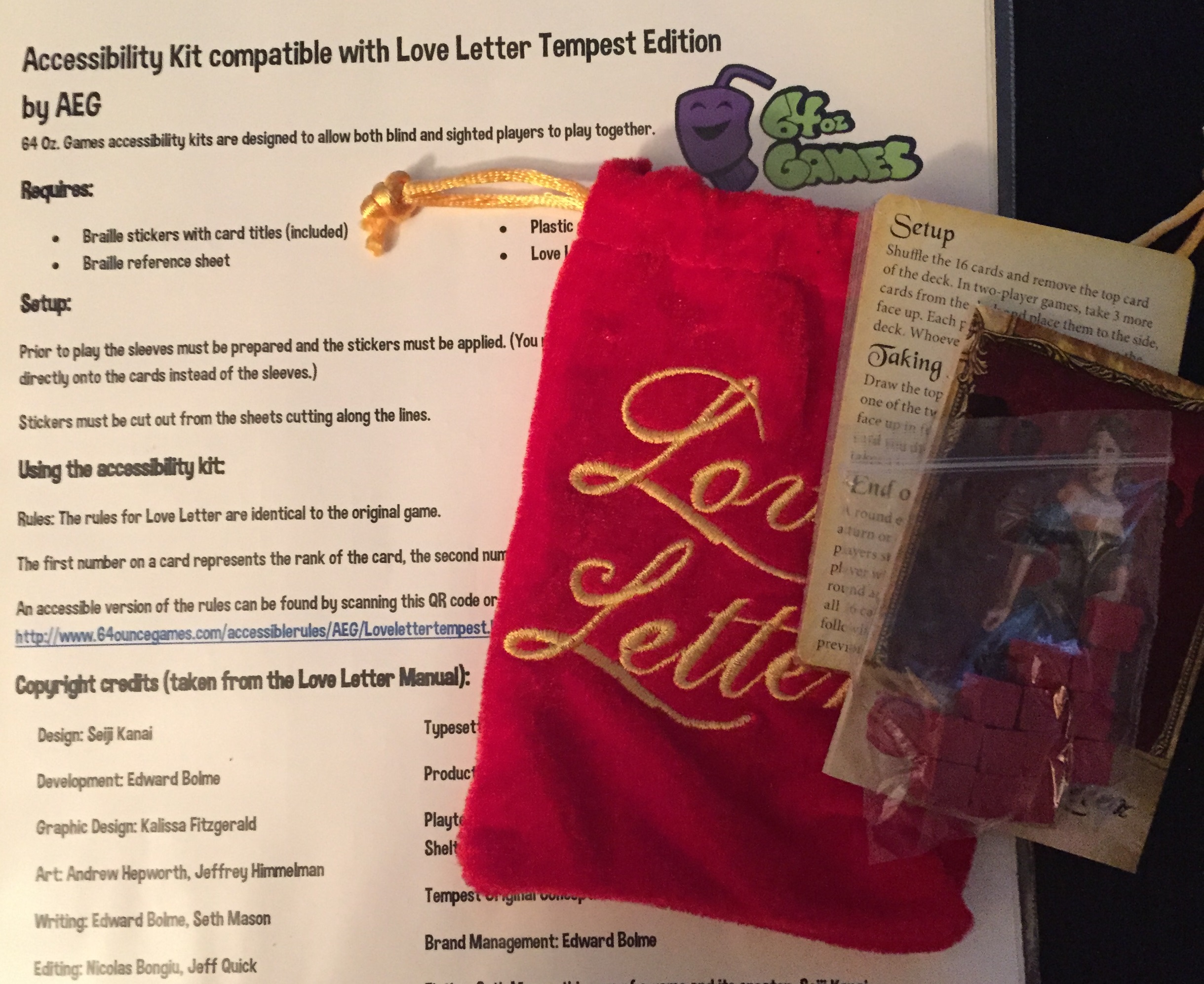 Recently I won a raffle and got a free copy of the game Love Letter from Alderac Entertainment Games and the accessibility kit made by 64 Oz Games. After learning about 64 Oz Games through Kickstarter, Aser and I have been excitedly following their work – we have Munchkin and Dominion assembled and ready to play and the two braille d20s Aser uses came from them as well. I wanted to show off my winnings, and when I go see Aser next week we’ll post a review for the game.

Once you have your cards and kit you cut out all of the stickers. I can read Grade 1 Braille visually, but I still ask Aser a lot of questions to make sure I’m sticking the right sticker on in the correct orientation. I made some mistakes when I tried to put together Dominion by myself and it was a pain to correct them.

Once you have your stickers cut out, you can stick them directly on the card or on a card sleeve holding the card. Aser and I decided to put everything on sleeves to protect the cards. The sleeves make the cards slippier, and the Braille causes them not to stack flatly, but that can be fixed by using card holders. The great thing is the stickers are see-through so sighted players can read the cards easily as well.

Once all the cards are in their sleeves you’re ready to go! There isn’t much text on these cards so the Braille fits on them easily. For other games, like Munchkin, the Braille is a short descriptor of the card and we were given QR code stickers to put on the back that Aser can scan to get the full description.

We’re huge fans of 64 Oz Games and the work they do to make it so Aser and I can enjoy all the board games we want. You can find them on their website, or support them on Patreon. Thanks so much for the free kit! And a special thanks to Alderac Entertainment Group for the copy of the game. We can’t wait to play and we’ll let you know how it goes next week.

One of the principal selling points for the Cypher System is the ease with which a GM can pick it up and be running epic games of action, intrigue and suspense in just minutes. The thing is, that many of the steps that Monte Cook Games took to achieve this happens to make the game a dream to run as someone with a visual impairment.

Simplified Movement:
Distances in the Cypher System are abstracted to immediate (within arms reach), short (10 to 50 feet), long (50 to 100 feet), and beyond 100 feet. This means that out of the box, the system doesn’t rely on movement grids, map squares or require you to establish ranges. Moreover, line-of-sight and other conditions are defined solely by the narrative. This means that with an imaginative group of players involved in the story the GM is telling, combat can move smoothly without having to manipulate miniatures or tokens as part of the core experience.

Simplified Bonuses and Penalties
My Cavalier in Pathfinder often has bonuses to his attack roll from his strength, the weapon he wields, abilities he and other party members are using, and circumstances of combat: so he can have a +9 to to a d20 roll as a level 3 character. The Cypher System’s measure of difficulty, in steps ranging from 0 to 10 with training, assets and circumstances decreasing the difficulty by steps, and bonuses only ever adding 1 or 2 to a roll makes managing the math at the table a trifling concern. I grew up having to manage complex equations in my head, but I’m glad that when I’m telling players what to roll, I don’t have to with the Cypher System.

The GM DOES NOT Roll:
Accessible dice rolling apps and random number generators aren’t that hard to find, and there are now even Braille dice on the market, but what requires even less time- not having to roll at all. The GM sets targets for the players to roll against, and when non-player characters enter combat against one another, players are designated to roll for them. It’s an elegant distribution of responsibilities that keeps the story flowing nicely while preserving the gaming aspect of the experience for the players.

All of this makes running The Strange for the podcast a breeze. I’m still what I’d consider a novice player, let alone a GM, so I think I’m still prone to making simple mistakes. But the consequences to the experience for the players I think have been far less than they could have been thanks to the features of the Cypher System. Blind or otherwise, if you’re interested in making the jump from running a character to running a game, I’d urge you to consider Numenèra or The Strange as terrifically accessible starting points, in more ways than one.